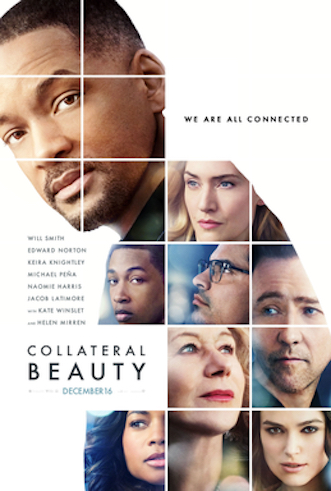 “When a successful New York advertising executive suffers a great tragedy he retreats from life. While his concerned friends try desperately to reconnect with him, he seeks answers from the universe by writing letters to Love, Time and Death. But it’s not until his notes bring unexpected personal responses that he begins to understand how these constants interlock in a life fully lived, and how even the deepest loss can reveal moments of meaning and beauty.”  -Excerpt from film promo, Harkins Theaters, AZ

This film doesn’t deliver a froth-induced high, violence- ridden terror or an equilibrium-busting storyline.  The box office films of 2016 films were trauma and black laced, full of sociopaths and skewed individuals with few redeeming exceptions, Collateral Beauty being one.  Though panned by film critics in their usual disdain for everything but dark and sinuous twisting works Collateral Beauty marks a tentative but courageous ‘leap of faith’ for the silver screen and one well worth seeing at the box office this holiday season.

Finally, one film comes along that is able to dip into the collective bandwidth with some progressive thought and plotline. Still playing to the mass market and stuffed with those handy, clichéd artifices, so odiously labeled as “new age,” Collateral Beauty has a refreshing way of cutting through the biases and delivering a credible and entertaining film about a man who must face the ‘premature’ loss of his daughter.

Without the knowledge or even a hint of the mention of karma and reincarnation to bolster him, something many of us hold as a higher wisdom, consoling us and buffering the visceral pain of intense loss, our hero is helpless in face of the ensuing torment of grief. Many would mask the pain with drugs and drink at this point, but our tragic hero lets it really sink him good-to rock bottom, stripping him of identity, and his personal and professional life…and sanity; yet the crash creates an existential chasm for transcendence-acceptance… and then, rebirth; but, not without the timely intercession of the ‘three graces’ as I call them, labeled in the movie: Love, Time and Death. Of course, such depictions are carefully crafted to fit a storyline palatable to the general public—still, it was nice to see the overarching message that grace does not desert the humbled soul but comes at that pivotal moment when all appears lost and hope rides on the slimmest sliver of the possible. Looking over the edge of the Abyss and rising again, turning our eyes heavenward is the supreme moment in the life of every soul.

Happily, our man in Collateral Beauty does not disappoint and the powerful archetype of the hero is preserved. Screenwriter, Allen Loeb, sets him on the right path again, and though we are not sure where he is heading (like so many of us), our hero is going to be fine as he leaves his shadow behind and moves on with his life.

Lest this looks too much like that pandemic of ‘inner work’ the socio-spiritual collective is always going on about, Hollywood has added a lot of panache and nuanced silver linings— a really likable cast of characters, Will Smith, Keira Knightley, Helen Mirran, Edward Norton, Michael Peña, and lots of likable subplots that we can all identify with. Happy endings all around for everyone- the gift of collateral beauty.

I was left with that inexplicable feeling that Collateral Beauty is the next step in our shared perception of reality. What a nice Christmas Gift!

Gratitude for The Illuminate Film Festival for delivering a pre-screening to Sedona! Enjoy more films like this and become a member. It also makes a perfect gift

for friends and family.